Knowledge institutions, research funders and governments must focus on the wishes and needs of scientists when improving storage and availability of research data. Close collaboration among these parties and researchers is essential. This is what the Royal Netherlands Academy of Arts and Sciences (KNAW) advocates in its report ‘Storage and availability of data for research – from intentions to implementation’, published on 20 May 2021.

The Academy explicitly adds the researcher’s voice to the considerable number of reports about the data landscape that have been published over the past decade. ‘Provide support’ is its first and most important recommendation. More data stewards are needed and legal and ethical problems must be alleviated by simplifying rules and regulations. Researchers should also be better trained in handling data, and of course be encouraged to deposit their data FAIR. According to the report, this particularly means that the researcher’s efforts must be recognised and valued, for instance in performance evaluations. The KNAW also argues in favour of adequate national and local data infrastructures, after first identifying the exact needs and the estimated cost.

DANS director Henk Wals about the report: “Many of the KNAW recommendations are already being addressed. Various plans are being developed for strengthening the infrastructure at national, domain specific and local levels. Important pillars are the FAIR data section of the National Open Science Program and the Digital Competence Centers initiated by NWO following the Apers committee report. DANS is actively involved in these initiatives. Supporting researchers is indeed central to these plans, and researchers are fully involved. ‘From intentions to implementation’ is crucial, and it could just be that the KNAW will be served at its beck and call.”

The full version of this press release and the report itself can be found on the website of the KNAW. 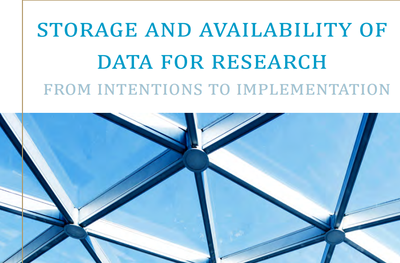