FAIRsFAIR National Roadshow series kicks off in the Netherlands

On Tuesday March 2nd the FAIRsFAIR National Roadshow series kicked off in the Netherlands. The event was organised in collaboration between LCRDM and DANS (FAIRsFAIR Project Coordinator).

Ingrid Dillo (Deputy Director, DANS) began the session with an introduction to the FAIRsFAIR project. This was followed by a joint presentation by Margriet Miedema (Coordinator LCRDM) and Marjan Grootveld (Coordinator Projects and Policy, DANS) who provided an overview of a range of tools for enabling FAIR:

The voices of researchers, research funders and publishers were provided by Antica Culina (Veni researcher NIOO), Maria Cruz (NWO), Eefke Smit and Joris van Rossum (STM Publishers), some of whom are also members of the European Group of FAIR Champions. In particular Antica’s take-home message, that researchers recognise the benefits of FAIR data, but need better support to transition to FAIR data, resonated strongly with the audience. Eefke confirmed that support is needed – and to some extent already given – in different stages of the research life cycle, by funders and publishers alike. All this is part of the joint journey towards a FAIR culture, helped forward by NWO’s incentives and recognition for Open Science.

The final presentation on ‘FAIR and Software’ was a collaborative effort by two FAIRsFAIR team members Morane Gruenpeter (Software Heritage) and Gerard Coen (DANS). Morane started by highlighting the important role of software in science and how this relates to the objectives of enabling FAIR and Open Science. Gerard continued by presenting two Dutch initiatives which aim to help achieve those objectives: the recently published ‘Recommendations for Research Software Sustainability in the Netherlands’ produced by the LCRDM Research Software Archiving Task Group; and the FAIR Software Route for researchers and data stewards, which was developed in partnership between DANS and the Netherlands eScience Centre (NLeSC). When asked “Which stakeholder has the biggest responsibility to enable FAIR, and sustainability, for software?” 28% of the audience chose “Research Institutions / Institute Leaders” followed by almost 24% chosing research infrastructures, showing that there is an expectation of top-down mechanisms to realise the objective. Morane ended the presentation by suggesting a number of ways to get involved with the topic including becoming a Software Heritage Ambassador. DANS has been a proud sponsor of Software Heritage since its inception.

The FAIRsFAIR National Roadshow series is currently being rolled-out across Europe. The next step on the tour will be Ireland on March 16th. Further events are being planned in Spain, Romania, and Finland. The series forms part of a larger strategy to broaden and deepen the impact of FAIRsFAIR both within and beyond established networks. 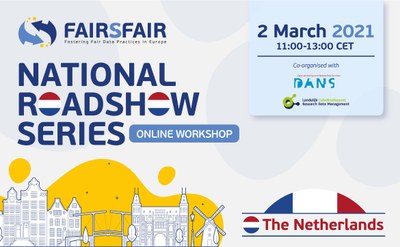