Information scientist Herbert van de Sompel, who is currently spending his sabbatical year at DANS, has been named the 2017 recipient of the Paul Evan Peters Award.

This was announced by the Coalition for Networked Information (CNI), the Association of Research Libraries (ARL) and EDUCAUSE, the three organisations that jointly present the award every three years to an individual who has made a ground-breaking and lasting contribution to the creation and innovative use of network-based information resources and services that promote intellectual productivity and scholarship. The award is named in honour of the founder of CNI, who died in 1996.
We asked Herbert van de Sompel, who has been a frequent guest at DANS since serving a KNAW fellowship in 2010, for his response to the news.

What does it mean to you to receive this award?

Which contributions do you think led to you receiving the award?

“A variety of things. My earliest relevant work was OAI-PMH, which is used in the repository world, cultural heritage and scientific communication – even Wikipedia uses it. It’s a very widespread protocol. And, of course, OpenURL and linking servers, which are used all over the world in academic and research libraries. Those are the things on which this award is mostly based, as they are really embedded throughout the infrastructure everywhere. Personally, I see Memento as my best work because it is super simple and yet extremely powerful. Memento has enabled the seamless integration of web archives in the Web, with archives becoming infrastructure rather than a destination. The past and present of the Web are now merged together, whereas they used to be separate.”

Part of the award involves presenting the Paul Evan Peters Memorial Lecture. Do you already know what you will be talking about?

“During my sabbatical here at DANS, my primary focus has been the Distributed Web. This is an entire movement, started by Tim Berners-Lee, which aims to redistribute the Web – in other words, to counteract the enormous centralisation that has taken place because of such sites as Facebook and Twitter. So I’ll definitely be talking about that, and in particular about the question of whether the stock of ideas and the related technologies can be used for scientific communication.”

Lastly, your dream is to realise ‘a scholarly communication system that fully embraces the Web’. How close are we to realising that dream?

“We have a very long way to go. Just look at the fact that most scientific communication is still in PDF and not HTML. The established publishers are quite bad at using web standards and web technologies  and at making information accessible to machines. The repository world has also been lagging behind by only supporting OAI-PMH. Fortunately, there’s a new movement – represented by COAR’s Next Generation Repositories, for instance – which aims to create technologies which make repositories the starting point, rather than the burial ground, for scientific communication. I hope that this repository movement, this resurrection of the repositories, will exert some pressure on the system. We’ll see in the next two years whether that happens.”

Herbert van de Sompel will be presented with the Paul Evan Peters Award at the CNI Membership Meeting on 11-12 December in Washington, D.C. 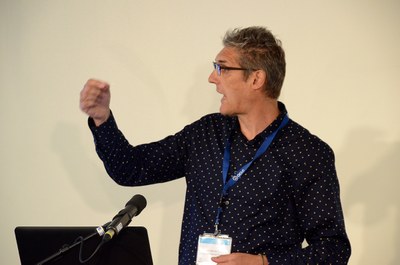